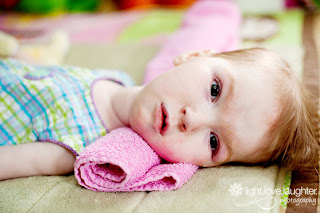 I've mentioned the Jones family here before, but I wanted to promote a fundraiser we're doing for their daughter Skylar and for SMA research. Skylar was diagnosed with type 1 SMA (Spinal Muscular Atrophy) in early 2010. SMA is a genetic disorder that is not very well known, but is the number 1 genetic killer of children under 2. Skylar has beat the odds and is fighting strong. She is such a beautiful and expressive little girl.
We've decided to run the generacetion 10k on May 21st to support Skylar and raise money for the Jones family and SMA research. We'd love to have you join us to run or make a donation for the Jones family. Donations can be made through the Jones' church and are tax deductible. We setup a website for the run and there you'll find more information about Skylar and about how to give or sign up to run. Check out the site at http://10kforskylar.com.
Please spread the word and help raise awareness for SMA and encourage the Jones family. I know this is kind of crazy, but not only are we running a 10k, but I think it would be incredible if we could raise 10k for Skylar and SMA. I don't know what will happen, but I want to pour love on the Jones and pray that God will continue to move in ways we can't imagine.
comments powered by Disqus
← 5 Controversial Theological Questions Beautiful Things →